The implementation of international banking standards in Vietnam has been the subject of contestation between reformist and conservative factions within the governing political party. In any given period, the speed of implementation has been affected by which of these factions dominates regulatory decision making, as well as the health of the banking sector.

The adoption and implementation of Basel standards in Vietnam has gone through three distinctive periods: from 1999–2006, the internationally oriented reformist faction pursued international regulations in order to discipline state-owned banks and improve the functioning of the financial sector. From 2006–13, the central bank (SBV) formally adopted Basel II but a domestic banking crisis effectively halted implementation. More recently there has been a return to pro-Basel preferences. However, interventionist financial policies, high implementation costs, the low internationalisation level of the banking sector, and the lack of competent technocrats inside both the State Bank of Vietnam and domestic private banks have all contributed to a high level of forbearance in Basel enforcement. 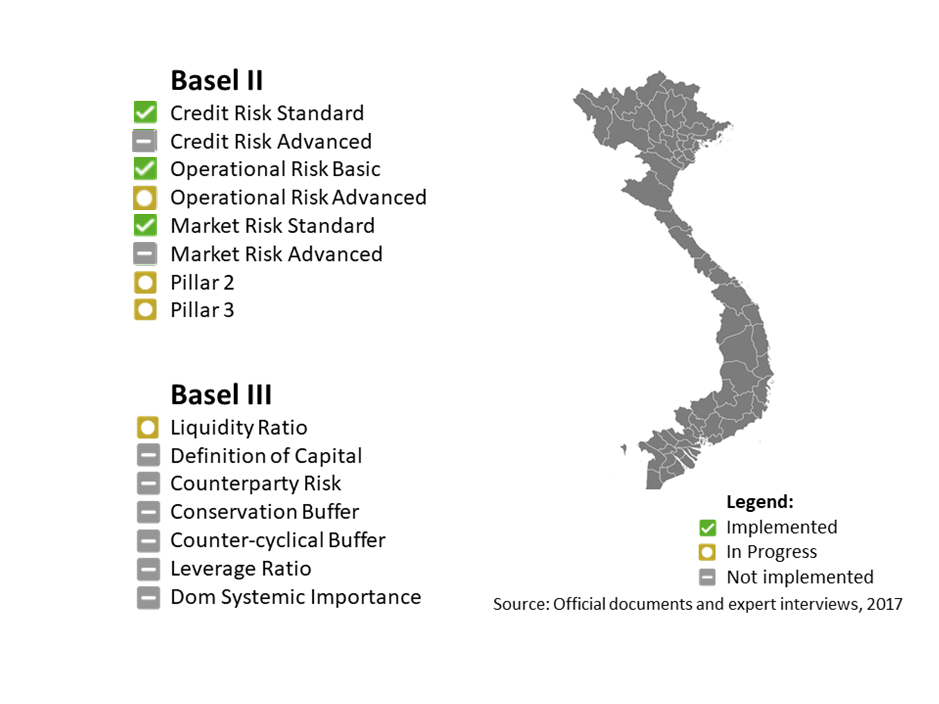 Vietnam began the transformation from a centrally planned economy to a socialist-oriented market economy in 1986 and, since then, international economic integration has been a major driver of economic growth. Vietnam’s financial sector relies heavily on five big state-owned banks which account for 45% of total assets. Private banks are much smaller, and foreign banks play a minor role in the banking system. In 2009, a real estate bubble burst, the stock market plummeted, and state economic groups suffered heavy losses, triggering a serious banking crisis. Since 2014, the situation has been improving; nevertheless, the economy has not returned to the previous high-growth trajectory.

Note: All data is from 2016 unless otherwise indicated

In the first period (1999–2006), Basel I was informally adopted, with the State Bank of Vietnam never announcing the adoption of Basel standards explicitly but incorporating some elements of Basel I into its banking regulations. In the second period (2006–2013), the State Bank of Vietnam strongly endorsed the adoption and implementation of Basel I, and outlined a roadmap to achieving Basel II compliance by 2010. However, a banking crisis during 2008–2012 and the resulting shift in politicians’ preferences turned Basel implementation into nothing more than mock compliance in this period. Since 2014, as the economic situation improved and economic integration regained momentum, the preferences of politicians, regulators and banks have shifted again, and this time they are conducive to a more genuine implementation of Basel II, and even some elements of Basel III. 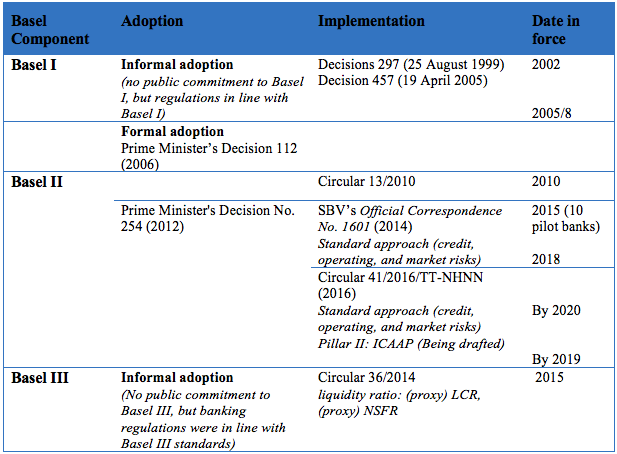 In Vietnam, reform-minded politicians, who are often more internationally oriented, seek to use international yardsticks such as Basel standards to impose discipline on state-owned banks and to reform the banking system. In contrast, conservative-minded politicians fear that imposing ‘capitalist rules’ on the state-owned banks will inevitably expose the weaknesses of these ‘leading’ state-owned banks. The conservative faction therefore, faces a dilemma. Conservatives expect integration into the global economy to stimulate growth, which is important for reinforcing the performance legitimacy of the Party-State. Yet such moves will erode the primacy of the state-owned sector and Vietnam’s socialist orientation.

The State Bank of Vietnam (SBV) is a ministerial-level agency under the government with little independence. It has overlapping and conflicting mandates as a bank regulator and state representative on the board of the state-owned banks. Moreover, since leaders of the SBV are political appointees, when conflicts emerge, they are supposed to follow the Party’s instructions and safeguard its legitimacy.

The period from 1999 to 2006 witnessed the reformist faction of policymakers take advantage of exuberant domestic reform and international integration to introduce international standards (Basel I) in order to discipline state-owned banks and improve the functioning of the financial sector.

During the period 2006–2012, mock compliance with the adoption and implementation of Basel standards was prevalent. In the context of a severe banking crisis, reformists and conservatives reached a consensus to hold back further Basel implementation – doing otherwise would suddenly expose all the hitherto unaddressed weaknesses in domestic banks, both private and state-owned, and therefore exacerbate already-difficult banking conditions. In addition, fully implementing capital adequacy requirements in accordance with Basel II would have forced the SBV either to recapitalise state-owned banks (at a time when its budget was already in distress) or allow participation by foreign investors (something the political leadership has long been averse to).

Since 2014, in the context of economic recovery and further international integration, politicians and regulators decided to complete the unfinished business of Basel adoption and implementation. In contrast to previous phases, commercial banks now favour adoption. Competitive pressures from foreign banks and the reputational benefits of international standards in attracting foreign investors and future partners have prompted banks to champion Basel adoption.